Sharks coach Sean Everitt says he is looking forward to seeing how young scrumhalf Jaden Hendrikse performs in his first start against the Cheetahs on Sunday.

After making his Currie Cup debut off the bench in last weekend’s loss to the Lions in Johannesburg, Hendrikse will make his first start for the Sharks when they travel to Bloemfontein to face the Cheetahs.

The 20-year-old was set to play for the Junior Springboks for a second time this year, before the Covid-19 pandemic resulted in the Junior World Championships being called off.

However, with incumbent Sanele Nohamba, who has started the majority of the Sharks’ Super Rugby Unlocked and Currie Cup matches, being rested, Hendrikse will get an opportunity to show why he is rated as one of the country’s most promising scrumhalves.

‘Sanele has got a rest this week, with Jaden Hendrikse getting a start and Grant Williams coming in on the bench,’ Sharks coach Everitt said. ‘Sanele has played a lot of rugby this year and he deserves a break. We are looking forward to the opportunities that the other two youngsters are getting and seeing how they go.

‘With a bit more time with Jaden, I am sure that he will improve with time in senior rugby. As you all know, he is still under 20 and a youngster, so it’s a good opportunity and exciting for him. ‘

Coming off a disappointing loss to the Lions, the Sharks are currently third on the table with two games to go before the playoffs.

Sunday’s match will be the first of two difficult away games to finish the Sharks’ round robin campaign, with a trip to Cape Town to face Western Province in a couple of week’s time.

Everitt said that despite the strange circumstances of training on Christmas Day, morale is high in their camp and the Sharks will be looking to take that energy into Sunday’s match.

Military precision: the never-ending battle to get a good night’s sleep 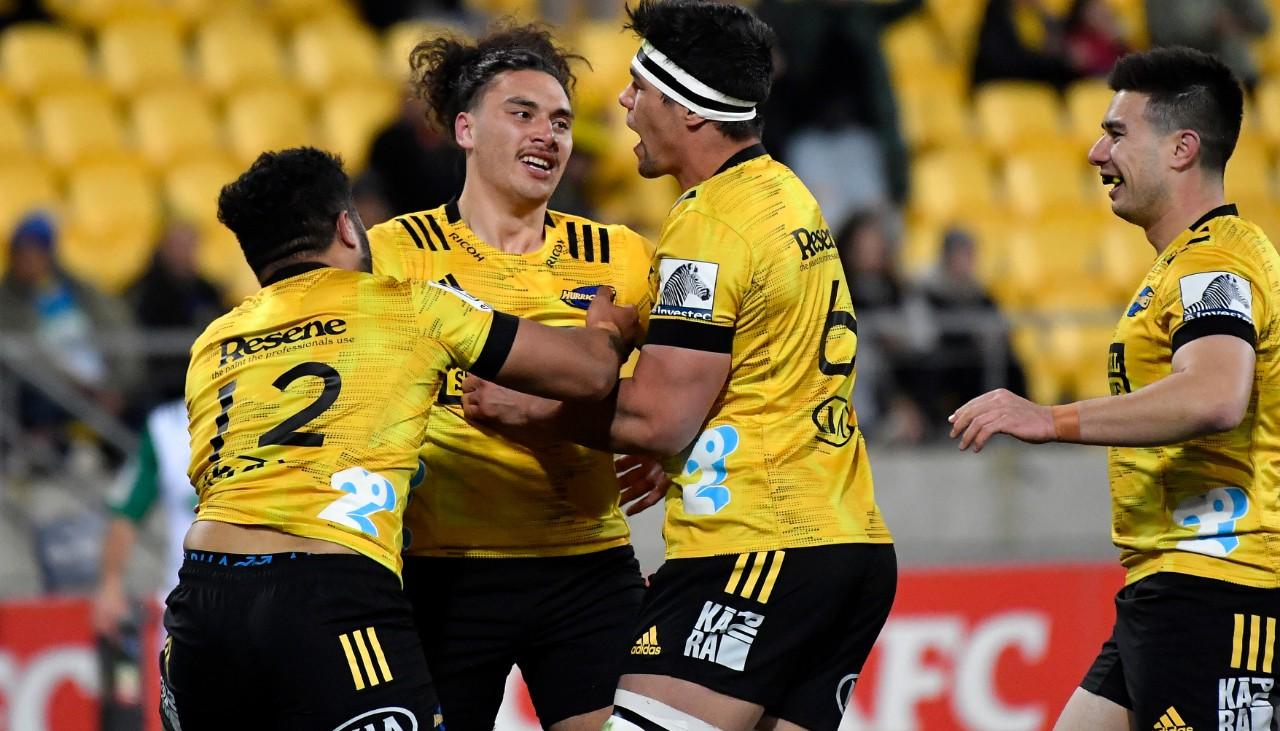 But with Super Rugby Trans-Tasman scheduled to begin next week, the competition could now hinge on how quickly Australian authorities can get to the root of the two new cases.

Should the trans-Tasman bubble burst, the Hurricanes would be the NZ side most affected – they are scheduled to face the Waratahs in Sydney in the opening round of the new competition next week.

The Highlanders would face the Reds in Dunedin and the Crusaders host the Brumbies in Christchurch, while the Blues and Chiefs would travel to face the Rebels and Force in Melbourne and Perth respectively.

Last month, NZR head of professional rugby Chris Lendrum made it clear that contingencies were in place, in case the trans-Tasman bubble burst.

“Obviously, we’re hoping that the six-week tournament can go off without a hitch, but I think we’ve learnt enough over the last 12 months that it might not,” Lendrum said. “We have to plan, potentially, for some disruption.

“The beauty of the competition start date – which is still over a month away – is that we get to see the bubble open, we get to learn a lot over the first few weeks and that will inform our contingency planning.

“In effect, it’s business as usual for us. We wait for circumstances to arise, we know what contingencies we’ve got in our back pocket and we move when we need to.”

The paused bubble will also give NZ Breakers and Wellington Phoenix reason to worry, as they prepare to bring fixtures home this month.

NZ Warriors have been reluctant to take that step, fearing that any disruption of the travel bubble would leave visiting teams stranded on this side of the Tasman, disrupting the NRL competition.

This ‘pause’ raises that possibility as a genuine concern for those other teams.

The hot-stepping 21-year-old is the first Super Rugby player to commit their services to the All Blacks Sevens programme for the Tokyo Olympics.

This week it was confirmed Salesi Rayasi had turned down the opportunity of a sevens switch to instead stay with the Hurricanes, while Blues and All Blacks star Caleb Clarke has said he will make a call any day now.

Nanai-Seturo was the only other realistic candidate to jump from 15s back to the shorter format, and ahead of his side’s Super Rugby Aotearoa final against the Crusaders in Christchurch on Saturday night, he told Stuff that would indeed be happening.

It’s understood the Chiefs have known of Nanai-Seturo’s plans prior to season’s start and have been planning accordingly.

The sevens squad is likely getting together next week ahead of a series against Australia in Auckland from May 21-23.

That is set to see Nanai-Seturo miss the Chiefs’ Super Rugby trans-Tasman campaign, though in speaking to Stuff this week, the fleet-footed flyer said he was still awaiting more details on just when he would link up.

“I don’t know if it’s my last game, I haven’t heard anything yet, this week I’m just focused on the Crusaders,” Nanai-Seturo said.

“I just know that I’ll be back with the sevens boys, but I haven’t got a set time.

“After this weekend we’ll see what happens, if I’m meant to be back next week or after.”

Nanai-Seturo debuted for the All Blacks Sevens back in 2018, amidst an ugly tug-of-war between New Zealand Rugby and the Warriors NRL club.

He has gone on to play 61 games in the black jersey, enjoying some starring moments on the World Series, and claiming a gold medal at the 2018 Commonwealth Games on the Gold Coast, where he was one of New Zealand’s two tryscorers in the final against Fiji.

Olympic gold would be the perfect accompaniment. Though it’s one step at a time for Nanai-Seturo, firstly having to actually make the cut for the Games squad, set to be named late next month.

“Because we’ve been playing back to back, I haven’t really sat down and thought about the Olympics,” he said.

“But after this week, or whenever I’m back with the sevens boys, then I’ll probably change my focus to wanting to make the Olympics team.

“First of all I need to buy a new set of lungs, a new set of legs too. Obviously sevens is a big running game, high intensity, and I think I just need to work on my fitness.

“I know the boys there well and the coaching staff as well, so they’ll get me up to speed.”

Dr Brad Miles, a lecturer in Sports Psychology at Canterbury University, talks about the effect having a home advantage will make at the Crusaders’ Super rugby final on Saturday.

In a 15s career which saw him star with Saint Kentigern College and play for New Zealand Schools, then represent Counties Manukau in the NPC, Nanai-Seturo, in between NZ Under-20s and All Blacks Sevens commitments, has now notched 20 games for the Chiefs, who he is signed with through till 2022.

Having rejoined the club when Covid-19 shut the World Sevens Series down last year, Nanai-Seturo has this year cemented his spot on the left wing, and said he came into the year with a good pre-season under his belt and a mindset just to play consistent footy.

He has been more than that, often a sight to behold with his bright boots bouncing away from would-be tacklers, sitting second in the competition for defenders beaten, with 34 from six matches, just one behind Crusaders first-five Richie Mo’unga’s 35, from eight games.

The 1.83m, 92kg dodger said inspiration for his lethal sidestep had come from family friend Roger Tuivasa Scheck, who he briefly trained alongside at the Warriors, as well as Chiefs team-mate Damian McKenzie.

“I used to watch them back at school, and I still watch them now, just highlights on YouTube and try and copy them and think that I am them.”

Now, after what will rate as the biggest game in Nanai-Seturo’s 15s career this weekend, those dancing feet should also be seen on sport’s grandest stage.

Wallabies star James O’Connor has bared his soul in an emotional interview about his rollercoaster rugby career – admitting he was once “living a lie.”

The former bad boy of Australian rugby is now one of its most mature and grounded figures and at 30-years-old will captain the Reds in front of a packed Suncorp Stadium in Saturday’s Super Rugby AU grand final against the Brumbies.

O’Connor was sacked from the Wallabies in 2013 after a series of off-field incidents and then arrested in Paris in 2017 for possession of cocaine.

“I wasn’t playing well so I started chasing things off the field,” O’Connor told Roz Kelly in an interview that will air in full on Nine and Stan Sport’s pre-game coverage on Saturday.

The only place rugby fans can watch every match is Stan Sport. Start your free sport trial now!

“Lowest point was I couldn’t get out of bed for weeks at a time. Couldn’t face people, I used a lot of substances to get me to that place, to be able to face the world.

“Because I was living a lie.”

“He got emotional,” Kelly said.

“It’s been a journey for him, a rollercoaster but it’s great to see him back at the top of his game.”

READ MORE: Why Thorn benched his captain for grand final

READ MORE: The forgotten Wallabies star left out in the cold

Indeed O’Connor was voted by fans as the Super Rugby AU MVP this season after piloting Queensland to a home grand final.

With skipper Liam Wright injured for much of the year, O’Connor stepped up superbly as a leader.

So much so that Reds coach Brad Thorn has trusted him with the reins and dropped Wright to the bench for the highly anticipated rematch with the defending champion Brumbies.

The man who will be tossing him the ball on Saturday, Queensland halfback Tate McDermott, spoke glowingly of the five-eighth’s influence on Stan Sport’s Rugby Heaven on Thursday.

“James is a lot older than a lot of the boys in the team but the boys love him,” McDermott said.

“Boys look up to him – Josh Flook came out and said he was his idol so the boys absolutely love having him around. He’s actually very serious when we get on the field, he’s our captain but off it he loves to have a joke around, particularly boys like Hunter (Paisami) and Jordy (Petaia), he’s very good with them.

“You’ve seen their development and I think a lot of that has to do with how James has mentored them and shared his wisdom… James’ arrival was awesome for us and probably kickstarted this revival for us. James is really special to play inside.”

For a daily dose of the best of the breaking news and exclusive content from Wide World of Sports, subscribe to our newsletter by clicking here!