■ The Boyzlife singer on turning 40 online, missing his golf and the Royal Philharmonic Orchestra

You and your Boyzlife bandmate Keith Duffy used to be in rival bands!

Westlife used to be Boyzone’s support act and Keith and I have been friends ever since so when we teamed up to form Boyzlife it wasn’t that strange. I’d been a solo artist for 12 years and it gets quite lonely being on your own so to be sharing the stage with somebody else again was exciting.

What was it like working with the Royal Philharmonic Orchestra on your new album, Strings Attached?

It was something I’ve always wanted to do but it used to be so expensive. I remember getting a ten-piece string section on a track on one of my solo albums and it cost ten grand! To have an orchestra do an album would have cost you nearly £300,000 so it was never something that was feasible. Things have changed. It’s a lot cheaper now and, luckily, we have friends who work with the Royal Philharmonic.

What made you donate the profits from your single You Needed Me to Age UK?

They contacted us to see if we could help them during the pandemic. It’s an important charity and a lot of our fans are elderly.

How did you celebrate your 40th during lockdown?

I had a long, boozy Zoom party with all my friends in Dublin and England. I actually started the night before because I lived in Australia for seven years and I’ve got friends there. That went on to 4am, then I went to bed and got up and the call started at 11am, so it was almost a 48-hour session!

What were you drinking?

I’d bought some vodka but you know you’ve been in lockdown a long time when you start to get to the rubbish drinks that never get drunk. You go into your drinks cabinet and there’s stuff that’s never been touched… the peach schnapps and amaretto.

How have you been keeping in touch with your daughters, Lilly, 17, and Molly, 18?

Online. I live in Rochdale and both my daughters are at their mother’s [ex-wife Kerry Katona]. Lilly was in college so she finished and Molly was on school holidays at the time. She lives with my mum and dad in Dublin but she’d gone home to England to see her mum and then they did the lockdown in Ireland so she couldn’t go back.

What have you been missing the most about normal life?

The hard part for me was not being able to play golf. I didn’t miss pubs or restaurants. I’m enjoying being home with my girlfriend Danielle. Keith and I spend all year on the road so to be home and settled has been brilliant.

Congratulations on your engagement! Are the wedding plans on hold?

It’s a shame we didn’t get married just before the lockdown. It would have been perfect — we could have had a seven-week honeymoon at home! We decided we were going to get married next summer but four of our friends have now all moved their weddings to next year so it might be too busy. We’re going to wait and see what happens after lockdown.

Are you managing to stay in shape?

The hardest part is drinking — that’s got the most calories. But Danielle is a very healthy eater so we don’t have crisps and chocolate in the house. If I can keep my diet under control then I won’t be too fat by the time I get out again!

How did you feel about turning 40?

I’ve been living like a 40-year-old for the past five years! Going out on Saturday night is now going out for dinner with other couples. In the old days I wouldn’t go out until 10pm. I’d get the last orders at the bar and then be in a nightclub until 5am. I haven’t done that in years. I’m now very civilised.

We’re two men in their forties so it’s a different vibe. We’re not going to have 500 kids chasing our car down the street. I’m too old for that now — I wouldn’t be able to outrun them, either.

Will you ever perform with Westlife again?

Maybe in 20 years’ time when we’re all old — I can’t see it happening any time soon. I was only in the band for six years. They became a new Westlife after I left and I’ve been doing other things for 16 years. We’ve forged our own paths and we’ll probably stick to them.

I had a massive bucket list for my 40th year. However, the only one I got to do was the Six Nations rugby at Twickenham in February — but Ireland got absolutely hammered by England. I should have known then that something bad was going to happen!

■ Boyzlife’s debut album, Strings Attached, is out on July 17. Tickets for the second leg of their UK tour are on sale now 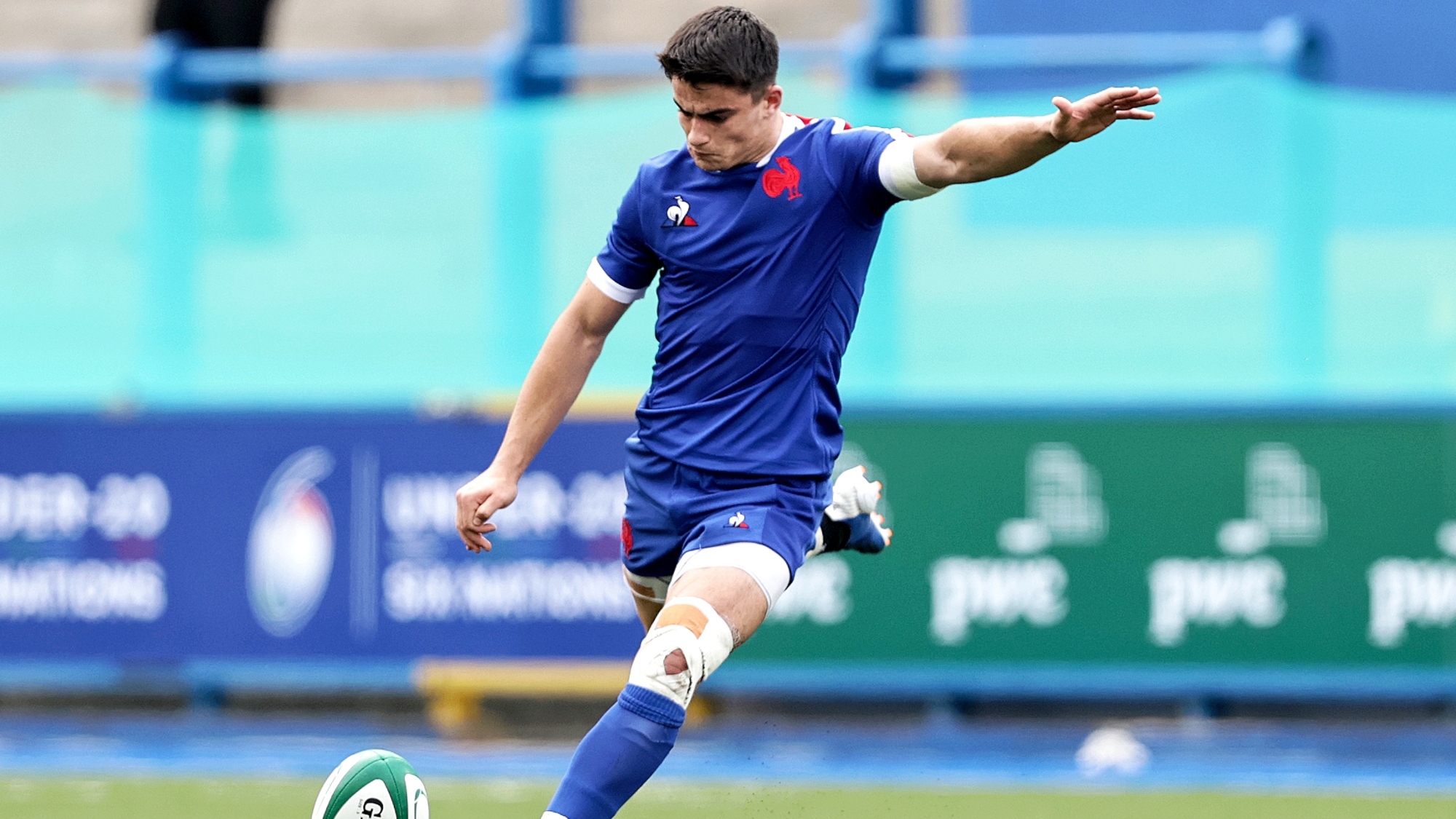 2019 champions Ireland had started the day as the only side who could mathematically topple eventual winners England at the top of the ranks, and Jamie Osborne’s try put France on the back foot early on.

Alex Kendellen also went over for the men in green in a try-filled first half, but scores from Thibault Debaes, Pierre Bochaton and Paul Mallez earned Les Bleuets a slender lead at the break.

Though Kendellen notched a second at the death Louis Bielle-Biarrey’s cleverly-worked try proved enough for France, helping them leapfrog their opponents in the standings.

Scrum-half Le Garrec said: “We’re really proud of our performance against Ireland – it’s great to finish on a high and give a good impression of ourselves.

“There are a lot of important players who will be leaving us after a number of years – the likes of Matthias [Haddad] and Paul [Mallez] – and we wanted to give back to them on the pitch.

“We have lots of good players. In some matches we struggled with our structure and getting out of our half, but with the ball we are capable of creating things. I love our style of play.” 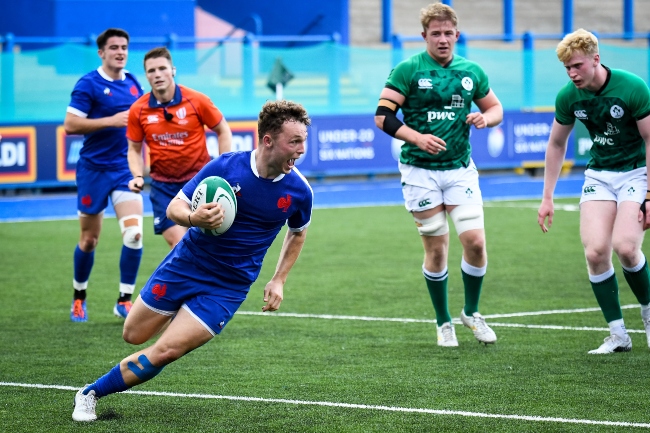 After an opening round defeat to England three-time winners France swept aside Italy, Wales, Scotland and Ireland in successive matches, and Le Garrec’s half-back partner Debaes agreed there were plenty of positives to take from the campaign.

Debaes, 19, picked up the Player of the Match plaudits against Ireland, having controlled the second half with a scintillating kicking display while also contributing a try.

He added: “Unfortunately the second half against England lost us the Championship, but we learnt a lot throughout the series. We were put under pressure by every team, but we learned to manage games and the end of matches.

“The level was high in every match and we are very happy to finish the Championship in second place.” 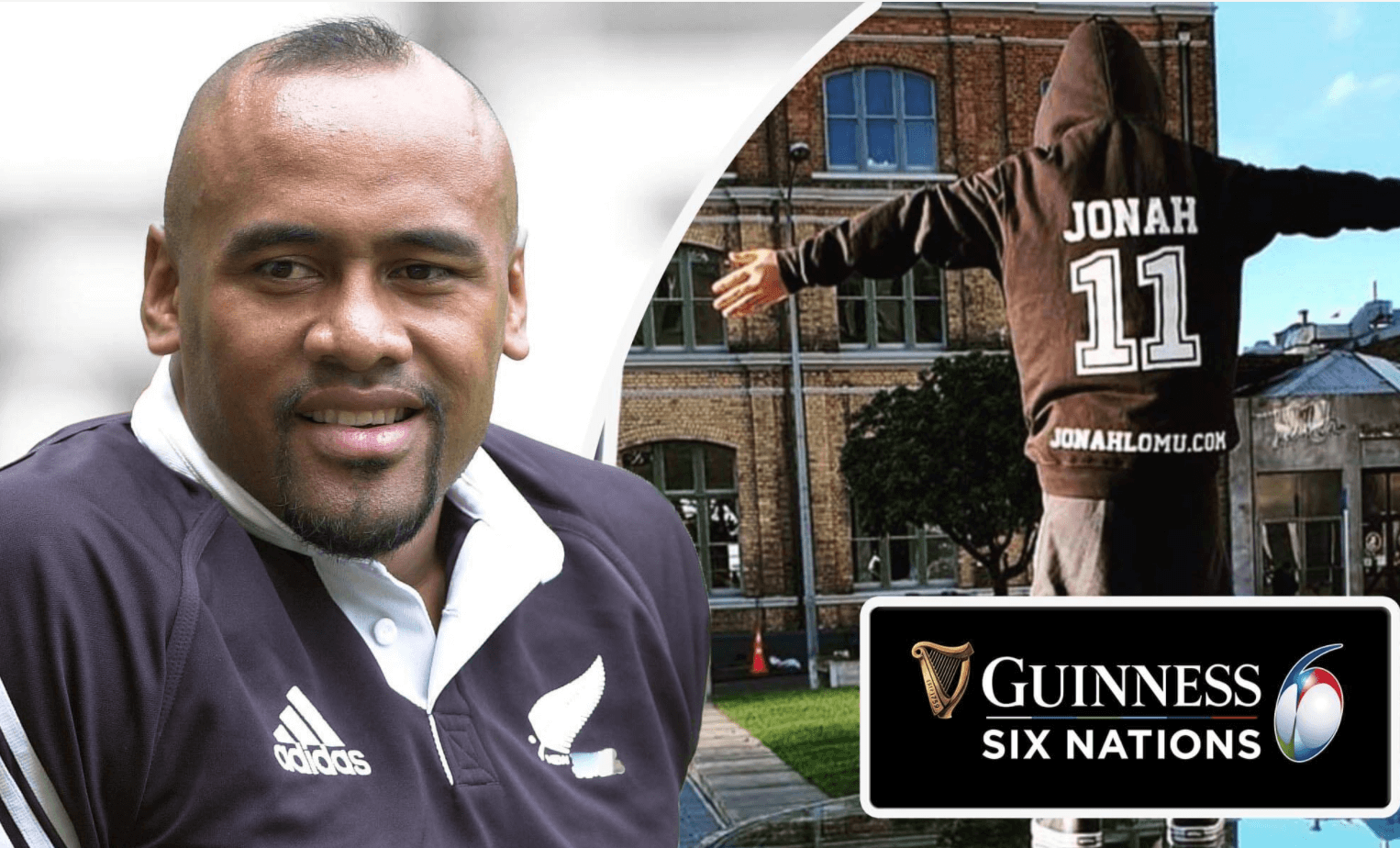 The son of All Black superstar Jonah Lomu has revealed he’d prefer to play in the Six Nations should he follow in his legendary late father’s footsteps.

Dhyreille Lomu, who currently plays on the wing, was born in France during his Dad’s brief stint playing for Marseille, hence any eligibility discussions for Les Bleus wouldn’t be an issue.

Known as Frenchie at school in New Zealand, the aspiring youngster has already began to impress at a number of age-grade tournaments in New Zealand.

Despite being 12, he’s already played in older teams as his obvious talent is beginning to shine through.

Lomu’s stime in France came towards the end of the his career, which also included a stint with the Cardiff Blues in Europe.

Playing on the wing Lomu finished his international career with 63 caps and 37 tries. He is regarded as the first true global superstar of rugby and consequently had a huge impact on the game

Below, we look at five other rugby legends sons who are making waves, but currently represent different countries to their legendary Dads.

Here’s a list of rugby legends sons who are set to play in the Six Nations.

Brooke, who can play across the back-row or at hooker, grew up in England so is fully qualified to wear the red rose. The powerhouse has represented Berkshire at county level and regularly played for his school, Wellington College. 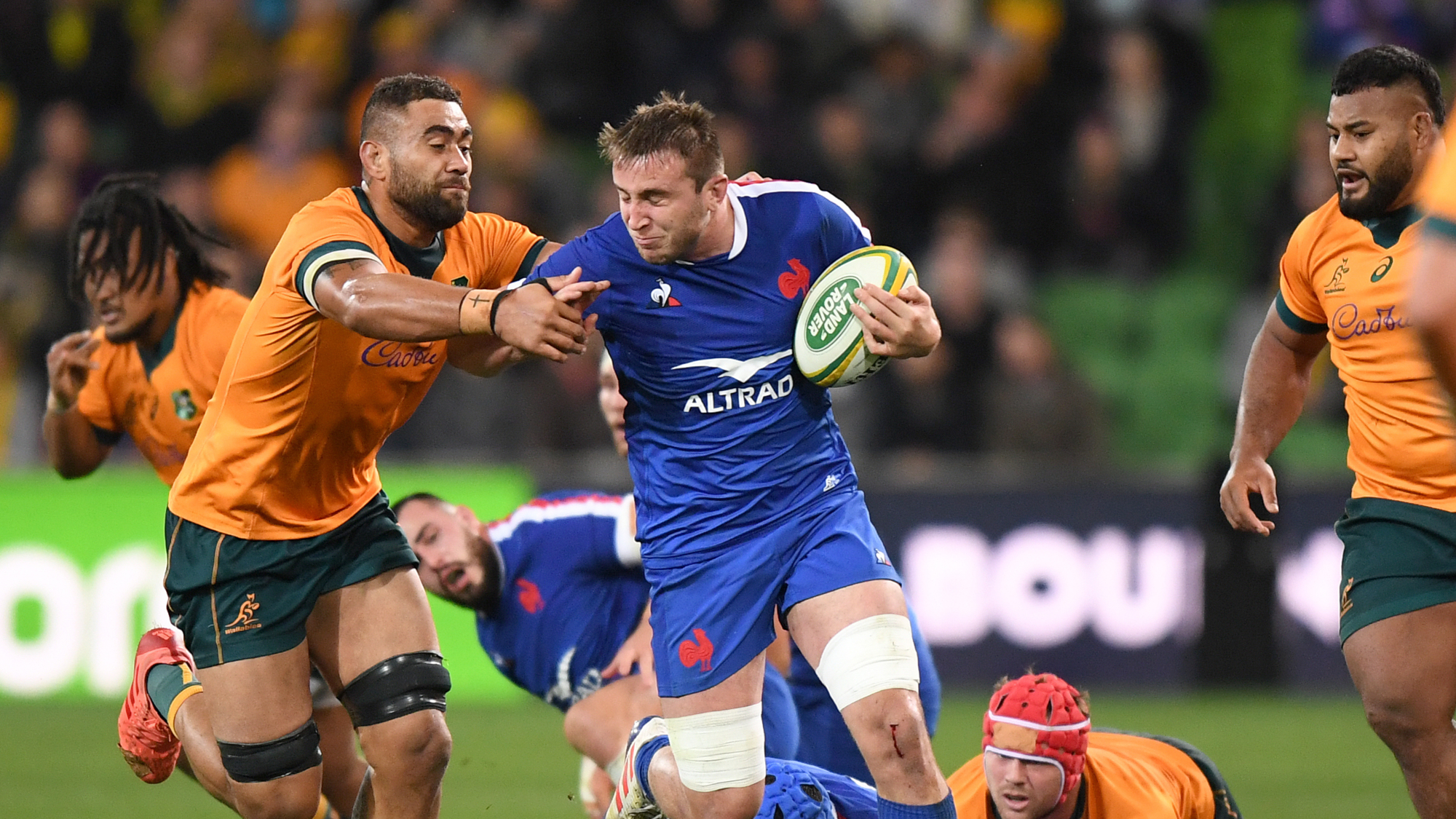 Les Bleus bounced back from their heart-breaking loss in the opening match of the series with a first win over the Wallabies on Australian soil in 31 years on Tuesday.

And now they will look to clinch the series back in Brisbane to record a first-ever series win on Australian soil.

It would be a remarkable achievement for Les Bleus, particularly when you consider that they travelled Down Under without the majority of their first-choice players because of a combination of injuries, rest and the absence of the Top 14 finalists.

In their absence, a number of players have staked a claim for bigger roles within Fabien Galthié’s side, and victory in the third Test would only strengthen those claims.

With three Tests in 11 days, and more importantly, a five-day turnaround, there were always going to be changes for both sides.

Yet Galthié and counterpart Dave Rennie have both shown faith in some of their key men, with France starting six players for the third Test in a row, while Australia have gone for even more continuity with eight players starting each Test of the series.

Fly-half Antoine Hastoy is the one uncapped player in the French starting XV, while centre Pierre-Louis Barassi and winger Teddy Thomas make their first appearances of the tour.

Anthony Jelonch will lead the side once again, joining Baptiste Couilloud, Arthur Vincent, Damian Penaud, Melvyn Jaminet and Gaëtan Barlot in starting every Test. After a standout display in the second Test, Cameron Woki starts once again in the back row.

There are two uncapped players on the bench, back-rower Alexandre Bécognée and centre Julien Hériteau.

For Australia, exciting scrum-half Tate McDermott gets his opportunity to start after coming off the bench in the first two matches, while Isi Naisarani is rewarded for some strong replacement showings after being named at No.8.

In Gaël Fickou and Virimi Vakatawa, France already boast one of the top centre combinations in the world, but this tour has seen Arthur Vincent show just why he was thrust onto the highest scene as a 20-year-old.

The Montpellier centre shifts to inside centre for this one, but will again line up against Hunter Paisami, having largely nullified the threat of one of Australia’s main strike runners in the second Test where Vincent made 25 tackles.

He links up with Pierre-Louis Barassi, the Lyon centre who ended the season in flying form and will be looking to get the better of Wallaby newcomer Len Ikitau, who is making his first Test start.

France captain Anthony Jelonch said: “This squad is hungry for wins. So after the win in the second Test, everyone turned their attention to Saturday’s game and had the feeling that we could do something truly historic. Winning this series, that’s not happened for a long time in the southern hemisphere.

“The squad has one aim, to win this match. We will all be ready to produce a big performance this weekend, especially after what we’ve seen on social media: the support of the public, all the families following us, it warms your heart.”